Increases to truck driver pay and a softening freight market were key to lower turnover numbers for large truckload fleets, according to American Trucking Associations (ATA),

which released its quarterly turnover rate numbers for the trucking industry, showing a decline of 11 percentage points in Q3 for large truckload carriers. This puts turnover at 87% for large truckload carriers, the lowest point since the Q1 of 2017, when it was at 74%. The drop erases a 10-percentage-point increase in the first half of 2018, when the rate went as high as 98%.

The turnover rate at small carriers was steady at 72%, while the churn rate for less-than-truckload carriers fell four percentage points to just 10%.

“First, large pay increases fleets have been offering appear to be working, and drivers are remaining with their current carrier,” said Bob Costello, chief economist for ATA. “Second, we did see a softening of freight markets in the third quarter from the incredibly strong pace it had set earlier in the year. Historically, softer freight volumes lead to lower driver turnover.”

Gordon Klemp, founder and president of the National Transportation Institute, which tracks driver wage trends, said he agrees with the ATA’s assessment of driver wages on turnover rates. He pointed to the trend of driver wage increases that saw the entire industry increase driver pay, sometimes multiple times, in a very short period. He said typically, pay cycles in the trucking industry occur over a 30-month period, but this latest cycle happened in just 10 months.

“The drop in turnover doesn’t surprise us a bit,” he said. “We had 10 months where carriers were making big moves, and in some cases, multiple moves. Roughly 19% of carriers we surveyed had moved at least two times by the third quarter and some had moved three times.”

The increases were an attempt by fleets to control their turnover because of the lack of drivers to replace them, and all of it was driven by increased freight rates. Klemp also said the softening in Q3 was predictable and that if the economy continues to grow as it has in the past year or so, the number of new jobs should keep the labor market tight.

The good US economy has produced more new jobs in sectors that compete with the trucking industry for labor, particularly in rural areas. Klemp doesn’t see the labor shortage going away in the foreseeable future.

He said increased driver wages probably increased turnover in the first few quarters of 2018, something that was born out in the 98% turnover rate seen in Q2. Drivers moved to the fleets advertising pay increases, causing a lot of movement in the job market. But by Q3, the rest of the industry caught up, and with fewer fleets needing to recruit new drivers and most truckers seeing a pay bump or two, they started to stay put. However, the disparity between the highest-paying carriers and the lowest-paying carriers has only increased during this period, noted Klemp. As a result, he expects fleets on the lower end will implement more increases in 2019, barring a negative change in the economy.

“We don’t think we’ve solved the turnover problem, but a combination of increased pay and a little freight market softening reduces the noise in the marketplace,” said Klemp. “Unless the economy craters, we expect to see increases in 2019. 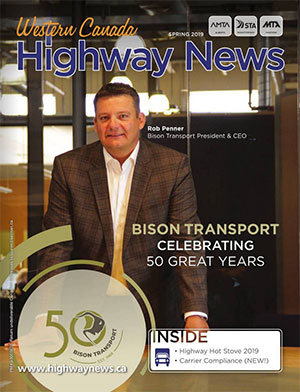 It's All About The People

Imagine on Monday, you discover that your meticulous, rule-following accountant and creative, eccentric marketing person have switched positions. How’s this likely to work out? In truth, some variation of this misalignment is common in most organizations.

The Saskatchewan Trucking Association would like to announce our partnership with Natural Resources Canada. During this partnership, the STA will be offering training and programming; including Smart Driver for Highway Trucking, the Green Freight Assessment Program, and SmartWay Canada.

Q - How healthy is the trucking industry in your province?