As of March 15, new commercial truck drivers must now undergo mandatory training in Saskatchewan. “These changes will improve safety on our province’s roads by ensuring Class 1 drivers receive more rigorous standardized training, based on strengthened curriculum requirements,” said Joe Hargrave, minister for Saskatchewan Government Insurance in a media release. The new guidelines require drivers seeking a Class 1 commercial licence to take at least 121.5 hours of training and undergo a full year of monitoring. Training hours include 47 in the classroom, 17.5 in the yard and 57 behind the wheel. Training focuses on four areas: basic driving techniques, professional driving habits, vehicle inspections and air brakes. While current Class 1 drivers need not undergo new training, anyone wanting to drive a semi-truck as part of a farming operation must pass the new tests. Driving schools saw a spike in enrolment in recent months as new drivers raced to beat the regulations. The number of booked exams reportedly doubled between December and February after the regulations were announced. Earlier in March, Alberta announced new minimum-hours requirements for truck drivers and Manitoba announced its MELT regulations would be in effect September 1. Ontario was previously the only province with mandatory training. National training standards for entrylevel semi-truck drivers will be in place by next January, according to the country’s transportation ministers. “We are motivated by the need for safety,” said Federal Transport Minister Marc Garneau in January. “Canadians expect that people who receive their licence as drivers of semi-trailers and large vehicles should be properly prepared through training before they assume those duties.” (Source: CTV News) 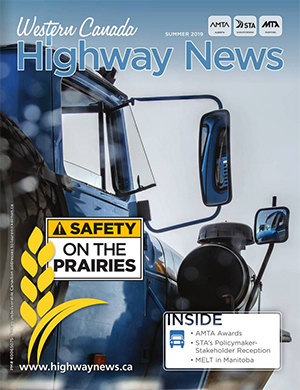 The STA’s Policymaker-Stakeholder Reception was on April 10, 2019. This event is a chance for members of the Association to advocate for the trucking industry to policy makers as a part of a continued effort to foster productive and positive relationships between trucking industry participants and provincial regulators.

Safety is a major reason for the Alberta Motor Transport Association’s existence. The organization’s Mission Statement underlines this commitment: We provide responsible leadership to our members by: