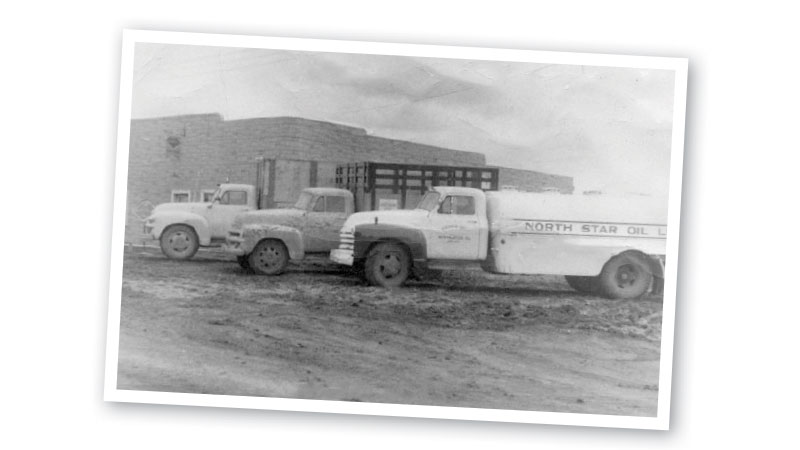 Doepker Industries is a leading manufacturer of premium grade semi-trailers. With 74 years of success behind their belt, in 2022, the company is recognizing the last 50 which have been dedicated to manufacturing trailers. The three-generation company – originating in Annaheim, SK, with three other locations in Moose Jaw and Saskatoon, SK, and Georgetown, ON – takes pride in its brand, mission, vision, and values: all supported on the pillars of quality, leading edge design, and customer service.

MISSION: To be the best value supplier of superior products, services and solutions to our customers in the transportation industry!

VISION: To lead the industry as an innovative, customer responsive and profitable manufacturer of high value products while being the supplier of choice for totally satisfied customers.

In 1948, Doepker Industries, a blacksmith repair and service shop, was founded by brothers Francis and Bernard Doepker after they returned to Annaheim, SK, from WWII. Rather than farming, like so many of their neighbours, they channeled in on their deep understanding of mechanics and built a business to help farmers in rural Saskatchewan. The brothers were happy to repair machinery, but the reality was, they were driven to build. More importantly, to build something to serve people better; a product that would do the job like nothing else could.

By 1956, four more Doepker brothers – Donald, Ted, Ray, and Jerome – joined the team and, collectively, they evolved the business to speak to a variety of customer-focused solutions. The owners remained focused on the farming community not only with repair and service, but also with designing and manufacturing agriculture implement equipment. They were proven inventors recognized as innovators in the province. They eventually introduced machinery no one had ever dreamed of, including their patent-designed Rod Weeder and Hydraulic Harrow Drawbars – innovations now common worldwide. It was an epic start for the company indeed.

With success after success, the business grew strong... until December 13, 1963. Just before six o’clock, a fire broke out. Soon after, Doepker Industries lit the sky in a hot, raging glow. The Doepker brothers stood helpless as 15 years of work went up in smoke. This devastating event left some uncertainty of the company’s future.

Although this setback was substantial, the brothers remained determined and not once gave up on their passion. With the fire came a refined vision: a new shop, a new direction and a new meaning of ‘Doepker tough.’ The Doepker Industries’ story to its modern success began with the pivotal moment, in the early 70’s, when a customer came to the brothers with a semi-trailer for repair. The brothers gathered around the trailer. They admired the areas that were built well, pointed out the areas that were manufactured poorly, and then identified some opportunities. The customer’s response, “If you can do better, build me a new one,” was the ‘fuel to the fire’ that kick-started the Doepker brothers’ journey that would evolve the business to become one of the leading trailer manufacturers in North America. In 1972, Doepker Industries built their first trailer from the ground up; a hopper bottom grain bulker. The first trailer was built for that customer, based solely on that conversation: to do a better job and find a better solution. This ‘challenge turned success story’ officially introduced Doepker Industries into the semi-trailer industry. When others saw the finished product, demand started to roll in, all driven by word of mouth and supported by proven performance. While the company built both hopper bottom trailers and agriculture equipment, in the 1980s, Doepker grew into a modern manufacturing company with the addition of second-generation family members. This included Lionel Doepker and his cousin, Randy, who continued to grow the business. By 1984, the grain hopper semi-trailers became so popular, Doepker was manufacturing them exclusively.

Today, grain hopper trailers remain a large part of the company’s product portfolio as the design has continued to evolve along the way. Using the same philosophy of listening to customers driving for a better solution, in 1997, Doepker introduced the first-ever open end designed steel grain trailer into the market – a design that would define maximum payload and maximum road life. Like the Rod Weeder and Hydraulic Harrow Drawbar, this innovative design was so strong it would eventually try to be imitated by manufacturers across Canada. In 2013, Doepker launched their patented Legacy design: the only aluminum open end grain trailer on the market. The “Legacy” is a showcase of evolution from the first trailer built in 1972 and was given its fitting name to acknowledge the meaningful history the original six brothers started – “the Legacy continues.” Today, Doepker’s open end line of bulkers remains the industry ultimate. With an unprecedented design, clever choice of materials and attention to detail, customers have recognized it as the lightest, toughest and longest lasting semi-trailer on the road.

Doepker Industries continued to develop a reputation as being a solution provider in the area. The company’s continued success and growth in the semi-trailer industry granted the Doepker family an opportunity to expand their product portfolio and presence to Moose Jaw and Saskatoon, SK, followed by Georgetown, ON. Over the years, the Doepker team has created many patents in the industry – the most recent ones involving the Impact gravel end dump and Legacy open end aluminum grain trailers. In addition, the company has been honored by the business community several times, including Saskatchewan’s Business of the Year by the Saskatchewan Chamber of Commerce in 1989 and 2001. Doepker Industries was inducted into the Saskatchewan Business Hall of Fame and is ranked as one of Saskatchewan’s Top 100 Companies. Along the way, the company has worked diligently to find over 40 of the best dealer partners across Canada to represent their premium product. Doepker’s dealer partners share the same work ethic, focus and passion to satisfy the needs of customers.

In 2019, third-generation family member Evan Doepker, along with his business partner Bill Schuler, bought the company. While continuing to grow the company, satisfying customers and the desire to continually build something better still remains at the top of the list.

Eat dust or make it! The Doepker team likes making it – a lot of it! They currently serve six distinct trailer sectors across Canada: agriculture, commercial flatbeds, gravel, energy, forestry and heavy haul. The Doepker portfolio of products contains numerous models within each of these sectors. In addition, they build custom trailers for customers if the scope and quantity of the trailer design meets certain criteria.

The Doepker way of doing business involves working very closely with customers to ensure the utmost in product satisfaction and after-sales service. In fact, some have suggested that Doepker service is even more impressive than its industry leading semi-trailers.

Bill Schuler explains that Doepker Industries continually evaluates future opportunities, and the requirements customers have in the transportation industry. “We are customer-focused – when customers are successful, it makes us successful,” says Bill.

The Doepker team makes a point to visit their customers, learn what their needs are and understand how the company can evolve to cater to those needs better. Then, with every sale, Doepker Industries sends out a customer survey that asks how the sales experience was, how the trailer is performing, and how Doepker Industries can make the product/experience better. “We take that feedback and use it to drive continuous improvement,” says Bill.

The Doepker team is comprised of many 25-plus year employees in manufacturing, sales, and engineering. The company’s Research and Development division is a team of key personnel that play a critical role in turning opportunity into reality; whether a simple tweak to an existing design or an original from the ground up, never dare the Doepker team. It tends to bring radical change and industry-leading innovations that are Doepker “tough-to-beat.”

“Doepker, a true leader and innovator in the industry, strives on producing cutting-edge trailers that exceeds both the industry and customer standard,” says Evan. “The success of this department requires constant input and ideas from internal departments as well as external partners and customers.”

The Doepker drive to innovate has made them experts in producing a “batch of one.” This focus has enabled them to efficiently standardize a very large selection of trailer options to satisfy customers.
This allows customers to order the exact trailer spec they need to be successful and in their specific company colors regardless if they need one trailer or multiples.

From the beginning, Doepker Industries has provided a model of excellence through a strong work ethic and rural family values. Doepker Industries has always taken pride in working hard and pulling together in order to do the best job for its customers. With these values, the company has developed a reputation as an industry leader – not only with respect to its products, but in overall workplace atmosphere, worker performance and business ethics.

Their values have served them and their customers well for three-quarters of a century and they are confident that they will carry this forward well into the future. Some things should never change.

Influenced by their mottos, Do More Move More, Built Ready and Behind You Ahead of the Rest, Doepker Industries continues to break new ground and be a leader in the industry.

To celebrate 50 years of trailer innovation, starting January 2022, Doepker Industries will be introducing a commemorative trim package on each of their trailers to mark the occasion.

Looking back at the Doepker family’s history, Evan is grateful for every customer, dealer, supplier, staff and family member for helping Doepker Industries succeed manufacturing trailers for 50 years and is looking forward to what the future will bring. 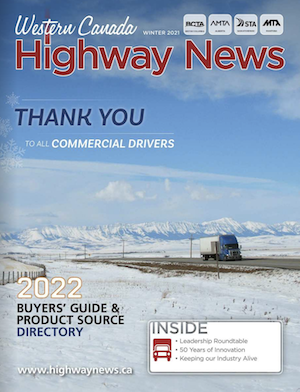