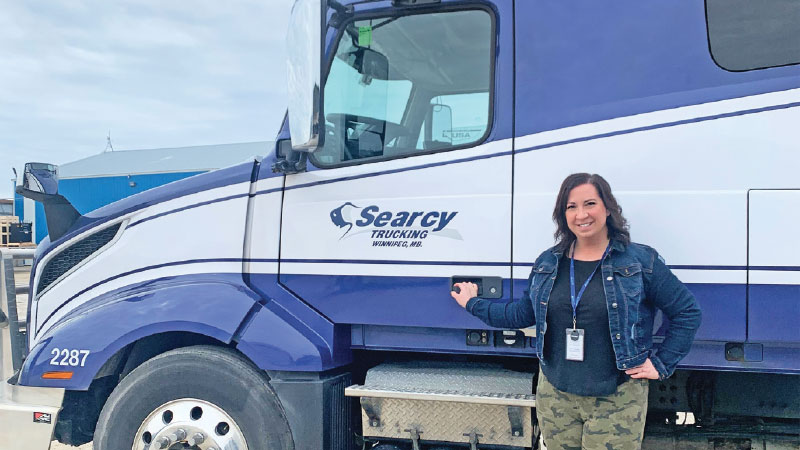 Some people work to avoid uncertainty at all costs, but Rachelle Baker knows that uncertainty and risk-taking can lead to a fulfilling career of twists and turns, empowerment, and respect. Now only ten years after she first stepped into the industry, she is Manager of Driver Services at Searcy Trucking and a new member of the MTA Board of Directors.

Rachelle’s career was jump-started by a phone call in 2012. Her mother’s best friend’s daughter, who worked in the industry, had news that there was an opening at Bison Transport for a pre-hire recruiting assistant, and she knew Rachelle was a good fit for the position. Yet, Rachelle was torn – she had four months left of her mat leave, and she was uncertain she was ready to get back into the workforce. She decided to interview anyway and was offered her first industry position. She quickly arranged childcare for her daughter, and that September, Rachelle took the leap and started with Bison Transport. She worked hard as a pre-hire recruiting assistant, advancing into different recruiter positions before climbing the corporate ladder in driver services.

When Bison Transport acquired Searcy Trucking in 2013, Bison Transport approached Rachelle with an opportunity to work in a hybrid position as a recruiter at both companies. Instead, Rachelle took a chance and moved full-time to Searcy in 2014.

“I hit the ground running and used all of the resources I had from Bison and tried to bring them here,” says Rachelle. “It was exciting, scary, nerve-wracking. I didn’t know if I’d be able to hack it, and now here I am, almost eight years later, and doing really well.”

When she started with Searcy Trucking, she was only one of four women employed with the company. As a recruiter, she knew it was important to break that barrier. Rachelle asked herself how she could showcase what Searcy Trucking had to offer. She had some social media training at Bison Transport and had experience with job postings, which she used to recruit drivers – some of whom still work at Searcy Trucking to this day. As the company grew, the Searcy Trucking team grew internally as well. Rachelle was front and centre, building the team over eight years.

“We’ve built a really good team here, and we have so many females working here now,” she says. “When I look back, even in that short time, and see the change and shift in culture and how many women work here, I feel that I’ve had an impact on that.”

Five years ago, Rachelle became the Manager of Driver Services position, a brand-new role for the company. She is proud of what she’s accomplished throughout her career and excited to see how the demographics of the industry shift and change over time.

“I was the first managing female here at Searcy, and now we have two other women in managing roles,” says Rachelle. “To me, it’s one of those things – if you see other females in that role, even one person, you know ‘I could be in that position one day.’ You want people to get out of that comfort zone. Recognize that you have a voice and can take chances and be successful – there are so many opportunities for women in trucking, you just have to explore it.”

Rachelle is incredibly grateful for those who have mentored her along the way, like Norm Blagden, President, and Howie Hildebrand, General Manager, with Searcy Trucking.

“They trusted me, and that trust comes with taking chances with recruiting – sometimes it works, sometimes it doesn’t,” says Rachelle. “There are so many different resources out there to hire drivers, build your team, and improve your culture. Searcy has been around for 52 years now, and we have a name and reputation to uphold. I feel like we did a great job at that. I feel responsible – between my team and me, we’ve built something great here.”

On April 1, 2022, Rachelle attended the Annual General Meeting at the Fort Garry Hotel in Winnipeg, MB, as a new member of the MTA Board of Directors. Attendees discussed topics important to the trucking and transportation industry in Manitoba. Rachelle says the overall experience was overwhelming in a good way. She knows that she will learn so much as she interacts with people who have been in the industry for more than 40 years.

“In this industry, everyone’s got a different opinion and is well respected,” she says. “There’s no ill intentions or comments – it’s just well put together, and I’m so proud to be a part of it and have a voice. If my drivers have any issues, I have no problem bringing that forward.”

Rachelle is excited to see more women enter the industry in the coming years. She urges those individuals to take the chance – as she did.

“Trucking is a male-dominated industry, and it’s up to us, as females, to show other females that we have opportunities to grow and succeed too,” Rachelle says. “The industry is a lot of work, but it’s so rewarding. Don’t give up, do your research, and see what’s out there – every role is important.” 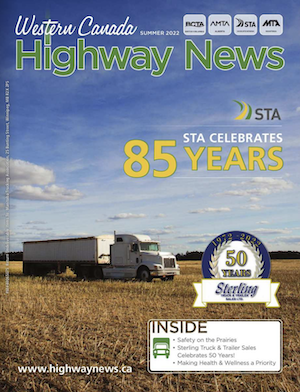